After writing the Green Bay Packers equivalent of “You Can’t Handle The Truth” yesterday, there is nothing else to say now about the topic. That was my definitive take on that team until the season starts. (Note: even 300 kind words towards Joe Flacco made it into that lengthy piece).

The 1’s at the end of the record for Brees and the Manning brothers are not ties. They are “no decisions”, or games where the QB had a 4QC opportunity, but the team still won the game on a return touchdown. It’s not a comeback win, not a game they lost, so it’s a no decision. They were not included in calculating the win percentage. 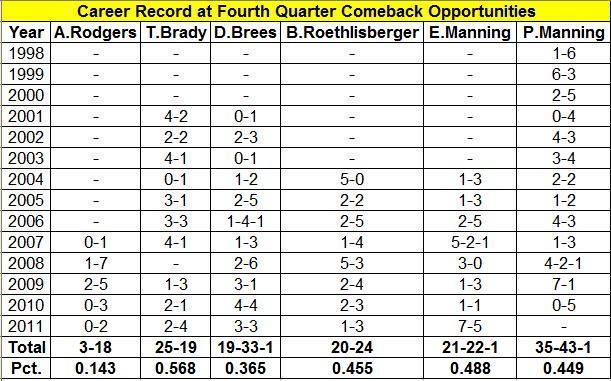 This was only for comebacks. Adding game-winning drives would help boost everyone, but Rodgers would still be well behind.

Finally, here is today’s article on the draft failure the Denver Broncos exhibited in taking Brock Osweiler with the No. 57 pick. Lots of history of franchise quarterbacks and their often failed successors in this one.

Rest of week: Enough Rodgers, time to put Brett Favre on blast. It wouldn’t be July without Favre.