I have an odd fascination for finishing an NFL data project. You put in the work one time until completion, then it’s done outside of any further updating. Now, depending on what it is, you have a resource that could be very valuable in your future writing and work.

Sometimes these ideas come to me from just the smallest hint of suggestion from someone. Yesterday on Twitter, my Colts Authority compadre Kyle Rodriguez was debating the merits of a 10-year playoff team with one ring versus a team with two rings, but only makes the playoffs five times in a decade.

That got me thinking about things like the most consecutive playoff appearances (no gaps) without getting to a Super Bowl or winning one. So I used my QB postseason database to create the following chart that shows how far each team has gone in the playoffs since 1966. After spending one hour of my time on a Saturday afternoon to make this, it’s now a valuable resource and I’m fine with sharing it. 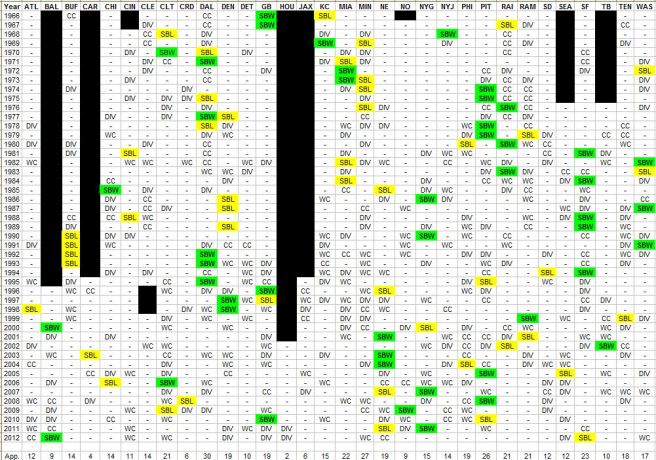 Do with this what you please, but if you’re going to use the chart on your site, I would ask for a courtesy link for where you found it.