Peyton Manning and Tom Brady are like Coke and Pepsi, the two biggest brands in the world.

You can appreciate both for what they are, but Coke (Manning) has always been better.

That’s my opinion and nothing I’ve seen in 14 years (and even longer on the Pepsi-Coke front) has been good enough to change my mind.

They meet for the 16th time on Sunday and I have already done a game preview at FO, so I implore you to read it if you haven’t yet.

There’s no denying this is the biggest game in the AFC this regular season. It usually is. The winner has had home-field advantage over the other except for the last two years. One of these quarterbacks has had the No. 1 seed in the AFC in eight of the last 11 seasons. 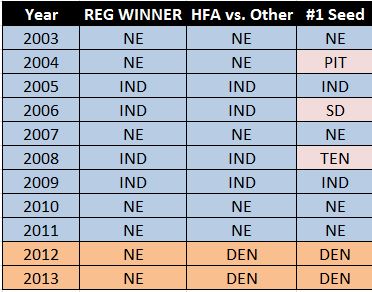 Rarely does this rivalry bring out the best in each quarterback. Only about half of the games featured both quarterbacks playing very well. An even smaller number of meetings were actually decided by one of these quarterbacks.

Last year’s 34-31 overtime classic in Foxboro was a perfect example. In a 31-31 tie, these quarterbacks had a combined seven drives to put their team ahead, but neither could do so. The Patriots only won after Denver muffed a punt return at its own 15-yard line.

When you look at the nine games in Foxboro, Manning-led teams are 2-7 and constantly shot themselves in the foot on every side of the ball. Sometimes it was in the most unlikely of ways. I got a copy of the first Brady-Manning game from 2001 and somehow Edgerrin James turned this low pass into a juggling interception for the Patriots: 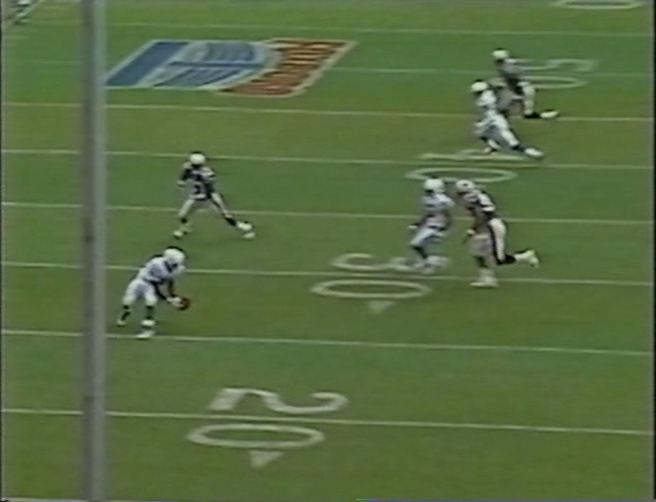 Remember the 2012 game with Denver? Demaryius Thomas fumbled in the red zone after a long gain. Danny Woodhead converted on the ground on a third-and-17 run. Manning lost  a fumble. In the fourth quarter, Willis McGahee single-handedly blew Denver’s comeback attempt by dropping a fourth-down pass and fumbling at the NE 11 with 3:42 to play.

The Brady-Manning game with some of the best quarterbacking from both was the 2004 season opener. In the fourth quarter, down 27-24 with 3:51 left, Edgerrin James fumbled at the 1-yard line on first down. Manning was later sacked by an unblocked Wilile McGinest and Mike Vanderjagt missed a 48-yard field goal with 19 seconds left.

Some have compared this week’s game to the 2005 meeting on Monday Night Football simply due to the alleged superiority of Manning’s team. That 2005 game was the biggest team advantage Manning’s ever had over Brady and it was a 40-21 beatdown. Both quarterbacks played at a high level, but the Colts were just too much for NE that night.

I don’t think the Broncos are that much better than the Patriots right now. It’s also not lost on me that in his five wins in the rivalry, Manning has thrown for a minimum of 321 yards and scored at least 26 points. Can he do both on Sunday? Sure, but it still feels like he’ll have to do both if Denver’s going to win. The teams aren’t uneven enough to expect he can get by with an average day.

If the game was in Denver it would probably be a comfortable win for the home team, but on Halloween weekend, I know Foxboro has been a house of horrors for Manning teams and Belichick will have Rob Gronkowski and Darrelle Revis at his disposal this time around.

I cautiously picked the Saints on TNF, but they delivered on the road.

Whether it’s ailing Tony Romo or old-but-inexperienced Brandon Weeden, I’ve been big on Arizona this week. This should be the game where DeMarco Murray’s 100-yard game streak ends, but I get the feeling he’ll be force-fed the ball (30 carries if possible) because of the quarterback situation. But I like the aggressive Cardinals on the road in another tight one.

Speaking of tight ones, the Steelers and Ravens should get back to a usual 3-point outcome this week. I think the big hit Ben Roethlisberger suffered at the start of the Week 2 game threw him off that night and the Steelers are playing much better now. I like them to win 23-20 here. Roethlisberger’s stats might be cut in half after last week, but 260 yards and 3 TD sounds more than adequate against Baltimore without Jimmy Smith at CB.