The NFL’s regular season sure goes by quickly. Even though it does feel like a long time ago when I woke up at 3 A.M., choking on my own mucus just hours after the Seahawks shut down Green Bay on opening night, the 17 weeks just fly by.

So for the last time this year, here are some thoughts on this week’s action.

REST: Colts at Titans, Bills at Patriots, Cowboys at Redskins

Some teams have little or really nothing to play for, but should they rest? I hate playoff rest, especially for a team that’s already earned a bye. That’s when you rest. Bill Belichick has not been one to make Week 17 an excruciating sight like Bill Polian’s Colts teams used to, so I expect Tom Brady and company to make short order of the Bills, but it really doesn’t even matter if they don’t.

Is this the first “rest game” for Andrew Luck? I think the Colts need to establish some rhythm on offense and the lowly Titans are a great opponent to do that against. I would aim for playing a half and hoping the offense puts up 17+ points before giving the backups the second half.

The Cowboys have a very slim chance of getting a bye, so they should rest DeMarco Murray, but I imagine he’ll play just long enough to get the yardage necessary to break Emmitt Smith’s single-season franchise record. Tony Romo should be a MVP favorite, so sitting could depress his numbers a little more than they already are with missing some time this year, but the Redskins are bad enough for him to add to his career-best season. Still, I would not have him in there in the fourth quarter along with anyone else that’s irreplaceable.

No way will Jeff Fisher sweep the Seahawks with a home game where Seattle can clinch the No. 1 seed, but he might see his defense throw a cheap shot or two along the way. I picked Seattle to repeat all year long and I see no reason to change that. Russell Wilson won’t have the dynamic 300/100 game again, but I expect the Rams to struggle to reach 10 points in this one, especially if we’re just looking at offensive scoring.

After Odell Beckham Jr. gets done with Cary Williams and Bradley Fletcher, he will replace Eli Manning in those “Unstoppable” commercials that never made any damn marketing sense. The Giants will end the season on a good note, and be ready to take down the Patriots in next year’s Super Bowl. Every four years, like leap year.

Well, you probably know the Lions haven’t won in Green Bay since 1991. Three weeks later Detroit won its last playoff game, 38-6 over Dallas. So it’s not hyperbole to say a win in Lambeau this week would be the biggest Detroit win since the 1991 season. We also know this is exactly the kind of game the Lions just don’t win. The Matthew Stafford era still carries this ugly graphic around:

Note: I watched Lindsay Rhodes and Brian Baldinger amusingly reference this stat on TV the other day. People are paying attention. Even good-looking blondes.

That’s 3-29 against teams that finished the season with a winning record. He still technically hasn’t played a team that finished 9-7 yet. Buffalo could finish 9-7, but Detroit lost that game. Miami could finish 9-7 and Detroit actually won that game with one of Stafford’s five 4QC wins (most in 2014). Otherwise the record is 1-2 this year with a win over Green Bay in which Eddie Lacy almost scored as many points for Detroit (9) than the Stafford-led offense did (10). Detroit’s defensive turnaround has been great this year. The Lions have intercepted a pass in 12 consecutive games (longest streak in the league). The Lions have held 11 opponents to fewer than 18 points. I think the defense will do a respectable job against an offense that’s been incredible at home, but I think Detroit’s offense is going to lose this game by being too ineffective. This offense struggled in Chicago last week against a putrid defense. I just don’t see Stafford pulling this one out, though if you give him the ball last, he could deliver Detroit’s finest moment in 23 years.

Does Chase Daniel exist for the sole purpose of starting against the Chargers in do-or-die games in Week 17? Hey, he might actually throw a touchdown pass to a wide receiver. Daniel played well enough to win last year in San Diego and that was with a backup-heavy roster. Andy Reid does a great job of getting the backup ready to play, so I actually don’t expect much of a drop-off, if any, in this one, which could be a high-scoring game. Philip Rivers will have to suck up the pain and play really well to get this win, but I do like the Chargers’ chances of claiming that last playoff berth in the AFC.

It seems ridiculous one of these teams will get a home playoff game, and possibly against an opponent (say Arizona) they could probably beat. These teams usually play tight games, which usually favors Atlanta. However, I think the team that can get its skill guy going (Jonathan Stewart for Carolina, Julio Jones for Atlanta) strong will get the win. I lean towards Atlanta just because it’s at home and Matt Ryan has been better than Cam Newton this season, but it’s certainly a coin-flip game. Neither team has been very good for any sustained period this season. I’m just confused why this game wasn’t played at 1 p.m. to give that time slot something more meaningful on Sunday. Let us focus heavily on DET-GB in peace, though that game’s more likely to be a blowout than this one.

Denver will have to play this game out just so the Bengals can’t jump ahead for a No. 2 seed, but if this is anything but a massacre of the Raiders, then maybe there is something rotten in the state of Colorado. I expect Peyton Manning to rebound from Monday night and lead the league in touchdown passes for a record fifth time by surpassing the 40 mark again. His teams have usually been aware of receiving feats, so I imagine he’ll try to get Emmanuel Sanders up to 10 touchdowns. He has nine this year. One more and he’ll join Demaryius Thomas and Julius Thomas with at least 10 touchdowns this year, making the 2014 Broncos the third offense to ever have at least three double-digit touchdown receivers. Manning was the quarterback of the first two offenses. 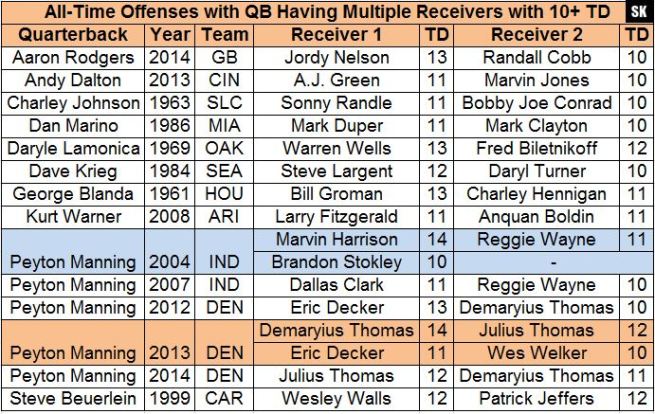 I already wrote a little preview at FO this week on the game, so let me provide a Pittsburgh fan’s perspective. I think Cincinnati’s win over Denver helps the Steelers in this one. Cincinnati won’t be playing for its playoff lives anymore since both teams are in, but this is for the division and likely a No. 3 seed. The Steelers have been much better at home this year, especially the offense which will need to play very well to win. That’s where the Steelers are this year. The defense can’t be trusted, so Ben Roethlisberger has to play borderline great for the Steelers to win. I actually think compared to the 42-21 game a few weeks ago in Cincinnati, we’ll see much lower scoring in this one. A.J. Green possibly being limited could be a big boost for the Steelers, but that’s why Jeremy Hill is the guy to watch. I can see him outrushing Le’Veon Bell, but it’s the passing battle that the Steelers need to win decisively. Roethlisberger played a piss-poor game in Week 16 two years ago against the Bengals that eliminated the Steelers from the playoffs. This defense has given him trouble in the past. His last game against them looks more like an outlier than anything. So I think he’ll have more of the team’s fate on his shoulders and will have to deliver a very good performance whereas Dalton will have more help. The Bengals can certainly win this game, but they’ve only won two games on the road in prime-time against a quality opponent since I’ve been born. So what do you think I’m going to pick here?

Note: I went all Jay Cutler on this final prediction piece of the regular season, meaning I didn’t proofread anything. If something’s wrong, I don’t currrr. You’re not replacing me with Jimmy Clausen.

I know it’s been such a home-road season for the contenders (minus Dallas), but damn, 75% home teams? Oh well. Trust the gut. The teams I picked to win were only 9-7 in the first matchup this season.