Is it worth anyone’s time to do a full rant about the absurdity of Tom Brady, who spent half the season playing his worst football yet, being a top MVP candidate? No, that’s nonsense I expect to take care of itself naturally the next two weeks. Peyton Manning will get 40-plus votes while a few (mostly homer) votes may go to people like Brady, Drew Brees and Russell Wilson.

A MVP should always be about the current season (all 16 games) and not a lifetime achievement award, but let’s forget about it entirely and go big picture beyond just 2013 since some on social media think I’m purposely putting down Brady’s season. Let’s file this one under “Well Allow Me to Retort.”

Since 2007, Peyton Manning and Tom Brady have each lost 23 games they finished.* That includes Thursday night for Manning.

*Finished can be tricky semantics when Brian Hoyer comes in for the last drive, but it really just means games they played into the fourth quarter and didn’t leave early so Jim Sorgi or Curtis Painter could make the game unwinnable (and unwatchable).

I took each QB’s 23 losses and crunched some numbers for points per drive production for their offense and defense and what their Total QBR (credit to ESPN) was.

The results were not surprising. On average, Manning plays a little better when his team loses and his defense plays worse compared to Brady. This is why I write and say what I do about each quarterback.

Here are the 23 losses for each: 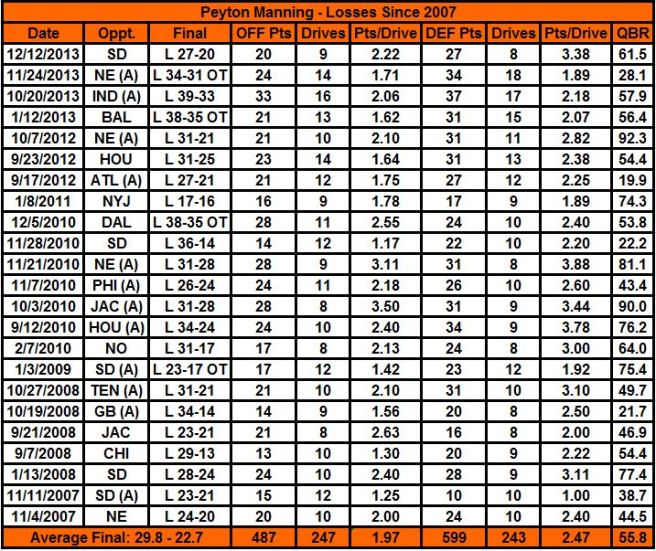 Not drastically different averages, but we do see Manning’s teams almost score and allow about a FG (3 points) more per game than New England. Manning’s led his offense to at least 20 points in all seven losses as a Bronco. Brady’s longest streak of scoring 20+ in a loss is three games.

We’re only going to score 17 points?

Brady’s offense has been held to 17 or fewer points in 11 losses since his famous quote before Super Bowl XLII. Manning: seven times.

2013 results still pending, but it would appear Manning has lost to 4 teams with a losing record and 15 playoff teams. For Brady, it’s 5 losing teams, 14 playoff teams.

A 50.0 QBR is average, and Brady (50.1) is right there while Manning is better at 55.8. Those are straight averages from the 23-game samples as I do not have the ability to get a cumulative QBR number. I would imagine it’d be close to what’s there.

Then I took the 23 games and sorted them from worst to best in terms of offensive points per drive and QBR.

Manning outpaces Brady every step of the way here. Manning’s worst game was 1.17 Pts/Dr, which Brady falls under four times. Manning has 13 losses with at least 2.0 Pts/Dr, including Thursday night’s game (2.22). Brady has six.

Same thing, but with QBR sorted from worst to best: 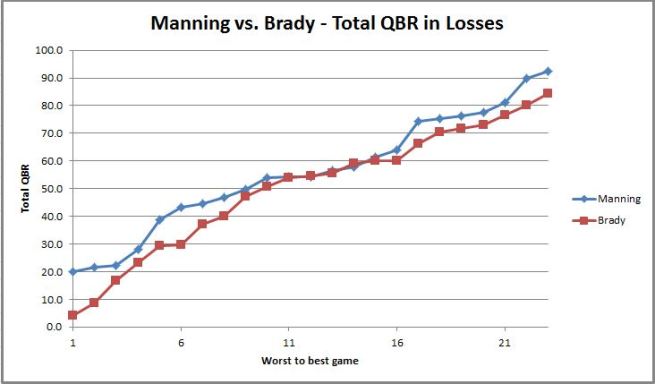 Here we see a closer race, especially for Games 9-15 where Brady ranks higher twice, then Manning pulls away.

Brady’s two worst games were 4.2 and 8.7 and both were playoff games. Manning’s worst was 19.9 in Atlanta last season when he threw a trio of first-quarter interceptions. His highest was 92.3 against Brady in 2012.

If we expanded this back to 2001-06, we wouldn’t have QBR for 2001-05 for starters. But in terms of point production, there’s a good chance it’d be the same trends (Manning scoring more, getting fewer drives and Brady’s defense being not as bad).

So what you’re saying is…

This week was a painful exercise in sports media manipulating the narrative again.

After the Cowboys lost on Monday night, allowing 45 points and getting zero stops, this was the headline I heard on TV on Tuesday morning: “TONY ROMO LOSES IN DECEMBER AGAIN…”

After the Broncos lost on Thursday night to a ball-control San Diego performance, this was the headline I heard on TV on Friday morning: “DID PEYTON BLOW HIS SUPER BOWL CHANCES?”

Yet if Brady has a dud performance in Miami — something as reasonable as the 21-0 dud he laid to a team with Joey Harrington at QB in 2006 — on Sunday, in the biggest game of Week 15 (game with the best records and the No. 1 seed on the line) you know Monday morning is going to instead start with “WHO DEY GONNA BEAT THE BENGALS?! IS ANDY DALTON MAKING A LATE MVP PUSH?”

I learned the hard way to trust my gut after last week’s big error.

I showed you my picks like I always do, but after noticing I had the home team finishing 15-1, I scrambled to make some changes and posted a second “official” set of picks. Those changes went 0-4 as I was right with my initial gut picks. Now every week will feature games that you can make a great argument for either team winning. Those are the hard ones, but we must trust our gut even when things look silly like picking so many home teams. Sometimes, crazy shit just happens.

Trust the gut. I knew San Diego had a good shot to win with playing ball-control offense, but I went with Denver anyway, so 0-1, and I’m okay with it.

I really do love the Cowboys this week against GB. The “ebb and flow” pick of the week. After such a bad performance on Monday, I expect a much stronger game on both sides of the ball. It won’t be as bad as Thanksgiving for Green Bay, but I think Dallas wins big.

I also really want to pick Washington to have a good game and win with Kirk Cousins so Mike Shanahan can look smart, but since when do I still think Shanahan’s a good coach? Put him out to pasture already.

And if Cousins does have a good game, no, we don’t have to start putting him in the damn MVP conversation.