I have been getting the “big games” correct lately, though the Patriots did not finish the job in Carolina. Still, that game provides part of the reason why I expect the Saints to beat Carolina on Sunday night. Until the last drive, which called for some desperate throws, Tom Brady picked apart the Panthers’ suspect secondary all night. The Patriots are the best passing team Carolina has played all season, which says a lot since it’s the worst New England passing offense since 2006.

The only other respectable passing game Carolina saw was Seattle in Week 1. While the Seahawks put up 12 points, Russell Wilson was 25-of-33 passing for 320 yards and a game-winning touchdown pass. Carolina enters on a nice eight-game winning streak, but the three wins against teams .500 or better came by a combined 9 points.

Playing a top quarterback makes a difference. Just ask the Kansas City Chiefs. While both games against Brady and Wilson were at home for Carolina, Sunday will be in New Orleans in the Superdome against Sean Payton and Drew Brees. Given how poor the effort was in Seattle on Monday night, expect a much better performance. The Panthers do not have the secondary to match what Seattle did.

Brees is typically lights out in these situations going back to 2006: 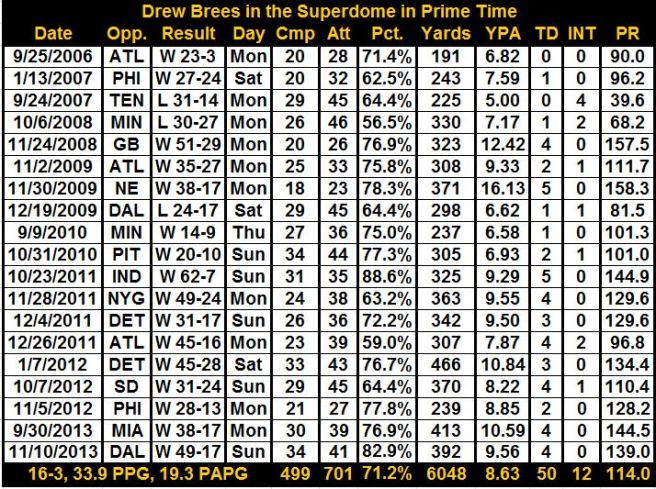 The very first game on the list was the emotional return to the Superdome following Hurricane Katrina. It was a great night for the Saints, but it was actually one of the weaker offensive performances on the list. The nine games since 2011 have been freakishly good, and there’s no great explanation for it. Four of those last nine wins were against playoff teams and that number could grow to five or six depending on how Miami and Dallas finish this year.

A Thursday game is beneficial to the home team in terms of not having to travel on a short week. A Monday game would give the Saints an extra day of preparation, which benefits the best-coached teams. But there’s no real reason the Saints should be any better at a Sunday prime-time game than the Sunday 1-4 p.m. games.

This season the Saints are 6-0 at home and four of the wins have been against teams .500 or better. Sean Payton has won his last 15 home games, dating back to 2011.

I have never been to New Orleans, but the atmosphere down there for a prime-time game seems like it would be more beneficial than for most teams. That’s why home-field advantage was so crucial for this team and why Monday was such a letdown, but truthfully it was always going to be a struggle to get the No. 1 seed. The Saints likely have to take care of Carolina twice just to win the NFC South, so this game is the most important one in the regular season for New Orleans. Forget about Monday. I’m sure the Saints have and will until they have to return to Seattle.

I’m not expecting Carolina to get blown out like many teams do in New Orleans, and that’s a tribute to the No. 1 scoring defense. But if the Saints handle this week the way they usually do against a Carolina team with flaws that have rarely been taken advantage of, it’s going to be a long night for the Panthers.

Apparently I am done picking the Texans again this season. Good lord…

Okay, including the fact Jacksonville already won, I have home teams going 15-1 by my picks. I’m totally screwed here. Just based on this simple fact, I’m going to change a few picks, so here are my official choices:

Okay, that looks better, even if I don’t feel any better about it.