I was reading my 2013 Wild Card predictions and I really have no memory of coming up with so many of those sentences. I remember the state of mind I was in that night for personal reasons, but thankfully 2015 has gotten off to a better start for my family.

The Ghost of Jake Delhomme might be haunting this game, which feels like something Chris Myers and Ronde Barber would call at 1 p.m. on a Sunday. Not a playoff atmosphere. Winner probably goes to Seattle, so it’s just leading the lamb to the slaughter. I would not even hesitate to pick Arizona at home where they should be playing this game, but because of a flawed playoff system, the 11-5 team has to travel to play the 7-8-1 team. The “bad playoff team” usually wins a playoff game too, because they get that home start. “Bad” may be generous for Carolina with six losses by at least 18 points this year.

The problem is third-stringer Ryan Lindley is easily one of the worst quarterbacks to ever start a playoff game. At least he showed some promise in San Francisco last week, albeit three interceptions and another loss. By promise I mean he actually threw the first two touchdowns of his career and showed he could throw for 300 yards on the road against a solid defense, utilizing the talent around him. His expectations on Saturday are built on his horrific rookie year and having to start against a Seattle defense that has been absurd to close the season, and that’s really not fair. Carolina is a lousy defense regardless of what you think you saw in the last month. The good finish could probably be explained by playing three divisional opponents in rematches, so familiarity was there and those NFC South teams of course struggled this year. They also beat Cleveland, who started Johnny Manziel and nearly finished with a Brian Hoyer game-winning touchdown pass. I know Lindley does not bring much more, if anything more to the table than a Josh McCown, but I think Lindley can produce something in this game. Unfortunately he’s going to hold the team back on third down/red zone chances and gives Carolina an edge in the quarterback department.

Cam Newton, what can I say? It’s been four years and I feel like this is another Jay Cutler situation where we are waiting to see him take the next level and it’s just not happening. The results are average at best. 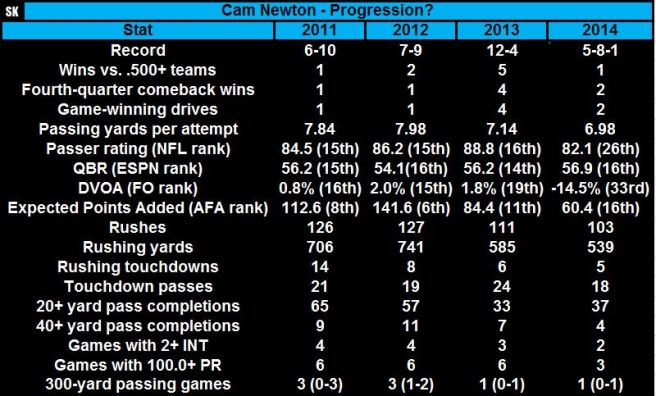 This season he had to play through some legit injuries, but he’s lucky to even be playing this weekend with a 5-8-1 record as a starter against a soft schedule. Yet someone still had the gall to tell me on Twitter that this year proves he’s “clutch.”

I think the Cardinals are the better coached team and their defense is going to have to step up here. Arizona’s defense is best exposed by a quarterback making good throws to outside receivers capable of exposing those cornerbacks. That’s not what Carolina has going for them, but I think a steady dose of Jonathan Stewart and capitalizing on Lindley’s mistakes will be enough for Carolina to steal this one at home. But if Arizona does have a fourth-quarter lead, keep in mind this defense has held up a one-score lead in all 11 wins this season. No one has cracked them yet and Todd Bowles will aggressively get after Newton.

I have written nearly 4,000 words on this matchup at FO, so please go there for my thoughts. One thing I left out: Pittsburgh’s offense has scored exactly 20 points in each of its last three games. That sounds underwhelming, but keep in mind they scored those 60 points on 24 drives (2.5 points per drive). That average would rank 3rd in the league this season, so that’s very good. Scoring 20 again would extend Pittsburgh’s record streak to 17 consecutive playoff games.

An odd one here. This game probably has the widest range of potential scoring margins, yet I still feel more confident in the Colts winning than I do any of the other seven teams this weekend. The Bengals are so inconsistent, and what can Andy Dalton really do if A.J. Green can’t play and Jermaine Gresham is so banged up? Chuck Pagano should be fired Sunday afternoon if he gets shredded by an offense featuring dumpoff passes, Brandon Tate and Mohamed Sanu. The Colts have not been that bad against the run this year aside from the night Bill Belichick used a bye week to drop Jonas Gray and 6-OL sets on them. The pass is howyou beat Indy, yet I don’t see Dalton breaking away from his playoff demons on the road against a team that should load up the box and pressure the hell out of him like they did in this year’s 27-0 shutout.

Yes, Jeremy Hill might put up another 100-yard rushing game, but it doesn’t matter if the quarterback matchup is lopsided, like you would expect it to be. Andrew Luck does not have to play great in this one, but he can’t afford a bunch of turnovers against a Cincinnati defense with little-to-no pass rush, but good coverage and ball skills. Luck didn’t even pass the eye test earlier this year — Bengals actually rushed him well that day though and the Colts are down several OL here — and still had over 300 yards and two touchdowns. He can get this win the ugly way, which fits with how the Colts have played down the stretch anyway. Dan Herron also needs to show up on the ground, because stopping the run has been a weakness in most games for Cincinnati this season.

We talk about the Bengals being inconsistent, but the Indy defense is amazingly inconsistent in its own right. The 2014 Colts are the first defense in NFL history to allow a 500-yard passer (Ben Roethlisberger) and a 200-yard rusher (Jonas Gray) in the same season. Two weeks ago, they were absolutely shredded by the Dallas passing game, allowing 250 yards on 22 dropbacks (11.4 yards per play) and five touchdown passes. To close the season in Tennessee in Week 17, the Colts allowed 50 net passing yards on 35 dropbacks (1.4 yards per play). I know we’re mostly talking about Charlie Whitehurst on a 2-14 team, but that’s still incredible defense, which the Colts show in spurts, like the 27-0 shutout over the Bengals that I don’t think will have much impact on this game, but I still don’t see the Bengals scoring much.

Of course, Marvin Lewis is 0-5 in the playoffs and has never scored more than 17 points in any of those games. If he gets embarrassed in Indianapolis, I don’t know how the Bengals can bring him back for a 13th season. Some Colts fans want Pagano gone, but at least he got past the Wild Card round in his second try.

Some great playmakers in this one and definitely a marquee matchup with Dallas’ offensive line vs. Detroit’s defensive line. Ndamukong Suh is lucky he’s playing this week, because that should give Detroit a better shot. I still have to give the edge to Dallas with the way the offense has been playing. There were three bumps in the road this year (Week 1 vs. SF, the Romo injury vs. Washington, and Thanksgiving), but otherwise this offense has been as balanced and efficient as any in the league this year. They attack you like an elite 90’s team with the one dominant WR (Dez Bryant), workhorse back (DeMarco Murray), loaded OL, a decent No. 2 capable of making big plays (Terrance Williams) and a very good tight end (Jason Witten). The Lions have tried to build their team in a similar fashion over the years, but the OL isn’t up to that level, the rookie TE (Eric Ebron) hasn’t developed yet and the running game isn’t nearly as consistent as what Dallas has enjoyed this season. However, if the Lions can handle Bryant, they give themselves a good shot, but he’s just been playing at such a high level. Dallas is also very efficient at throwing to the backs and Cole Beasley has value as a slot receiver.

We are in for some treat if this game is anywhere close to the past two meetings between these teams. In 2011, Dallas led 27-3 in the third quarter at home before blowing the lead and losing 34-30. Last year, 41 points were scored in the fourth quarter alone with Matthew Stafford’s incredible game-winning drive capped off by a quarterback sneak. The hot takes will scorch the Earth for good if something like that happens on Sunday. Detroit stood tall to those 8-8 Dallas teams and lead the league with 5 4QC/GWD, but this year’s Dallas team has been very good at avoiding blown leads and making their own comebacks/GWDs. Tony Romo had a MVP-caliber season and is playing the best football of his career. The Lions have been stagnant for most of the season offensively, but Calvin Johnson and Golden Tate should be able to do some damage against what is still a subpar Dallas defense. However, one could easily argue the Lions have only played three games against really good offenses all year (GB twice and NE). Dallas is certainly in that class and the game is in Dallas, which doesn’t mean much for the Cowboys (4-4 this year at home), but it matters for a Detroit team that simply does not go out and win games like this.

Since 1992, the Lions are 11-76 (.126) on the road against playoff teams. We know all about the struggles in the Stafford era against quality opponents. No home team is under more pressure to win this week than Dallas, but I have believed in this team since the win in Seattle. They should be able to handle the Lions.

I really do not like picking all home teams, but so be it, Jedi. This season the home team was 39-23 (.629) in games between teams with winning records.