On November 13, 2011, the Saints and Falcons were playing in overtime. This was the game where Mike Smith went for it on 4th-and-1 at his own 29 and failed. This graphic from FOX came up about Drew Brees and his game-winning drives: 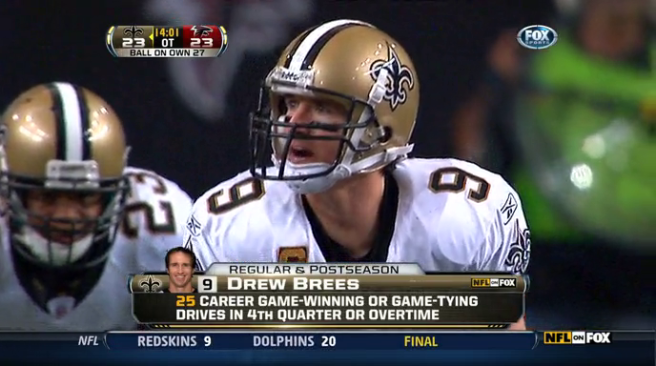 The fact I have this saved in a folder means I probably ripped them for this in Captain Comeback that week. For one, the semantics are ugly as “game-tying” should never appear in the text. As for the number, it even says including postseason, yet it should have been 27 instead of 25.

Indeed, Brees picked up his 28th game-winning drive that day. Flash forward to Sunday between the Saints and Buccaneers, and FOX had this graphic at the end of the game: 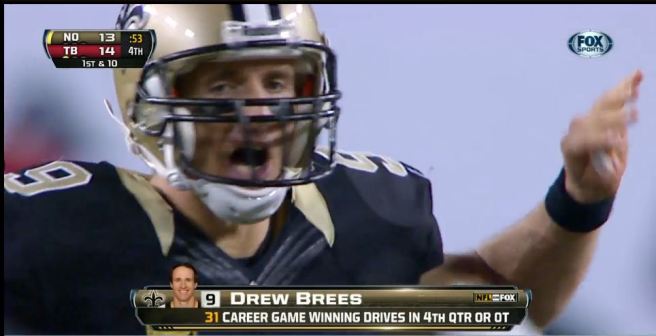 Now it’s up to 31, and Brees was in fact going for his 32nd game-winning drive, which he got after a dagger to Marques Colston to set up the field goal.  Notice it also kept the language much simpler and accurate.

So it took a few years, but maybe FOX has it sorted out now. Or maybe I’ll just watch a different game with a different production staff next week that tries to use the same “game-tying” mess I’ve seen in the past.

But I’ll try to be optimistic for a change.