Your chaos ain’t me. – Orchid

Another interesting week in the books.  So what am I looking forward to this week?

Pick 6 – If Matt Schaub throws a pick six for the fifth game in a row, his tenure in Houston may be over tomorrow unless the rest of the game is phenomenal. He has to play well against a poor defense at home.

QB Change – I don’t think Thad Lewis is much of a downgrade from EJ Manuel at QB for Buffalo. What I want to see is Cincinnati win a game they are “supposed to” win and not have another letdown after last week’s big New England victory.

Geno Brooks? – Geno Smith makes big plays, but he sometimes makes them for both teams like Aaron Brooks used to do for New Orleans. If Geno and the Jets can avoid turnovers again against Pittsburgh, the Steelers will set a new record by going 5 games without a takeaway to start a season. I already feel sick over my pick on this one.

Panthers at Vikings – Heavy hearts in Minnesota after the tragic news surrounding Adrian Peterson’s 2-year-old son. He’s expected to play and I think you’ll see the team rally around him with a big effort. Carolina was on the other end of one of those games last year against Kansas City when Jovan Belcher did his heinous act.

Point Spread – With the spread at 28 points for Jacksonville at Denver, this is the biggest spread since the 1970 merger. If I was a betting man, I wouldn’t touch this one. While very possible Denver pulls it off, that’s a monster margin for a NFL game, even if it’s Peyton Manning on his most dominant streak ever and the Jaguars looking like the worst team in 20 years. Garbage time alone makes you cautious about this one as I think Denver may call off the dogs earlier than usual. Yes, Denver’s scored as many points in each of its last two games as Jacksonville has all season, but isn’t 45-17 (no Blaine Gabbert!) reasonable for a final score? That still would only be a push.

Spread aside, Denver needs just 33 points to set the scoring record through six games of a season. That’s one bet that I’d gladly make on happening. 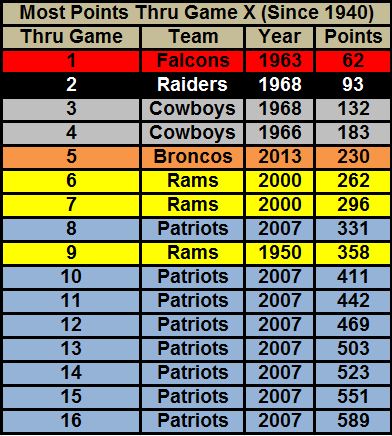 Manning needs two touchdown passes to set the new record for most through six games. That’s also a given.

Note: I compiled these tables myself through a series of searches on Pro-Football-Reference. If you want to cite them, do the right thing and use a reference.

If only all games were as easy as Thursday games. Picking the Bears, who picked Eli, makes me 6-0 on TNF.