Last year was my “Year of the Broncos” and for most of the season, that’s exactly what it was. Then the Super Bowl happened and Seattle proved to be the best team. Things shouldn’t be much different in 2014, and if Thursday night was any indicator, the Seahawks can be a stronger team overall this season.

Green Bay used to be the league’s most consistently competitive team, but the Seahawks have taken that crown too. Seattle hasn’t been blown out in 52 games and now holds the record for most consecutive games without losing by more than seven points, surpassing McCarthy’s Packers. Seattle also has what I believe to be the all-time NFL record with a fourth quarter or overtime lead in 31 consecutive games (including playoffs). 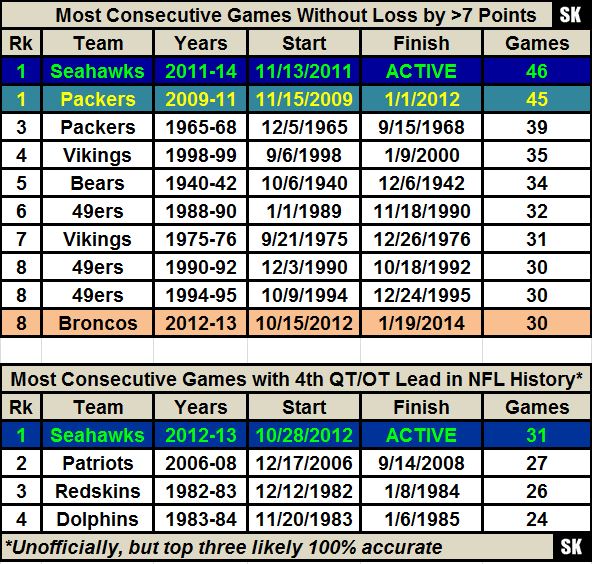 Beating up the Packers by 20 points is pretty noteworthy given Aaron Rodgers has only lost four starts by more than 14 points in his career. Seattle did it with its usual formula: great defense, great running and timely pass plays.

It’s scary that Seattle doesn’t even need Russell Wilson to throw for 200 yards to lead teams like Denver and Green Bay by three or more scores. Wilson has never thrown more than 37 passes in any game in his career, and even the game with 37 went to overtime (3 passes there).

How long can these streaks, which certainly are connected and correlated with a team playing great, complementary football, exist? Let’s just take the last one. I looked at 50 quarterbacks I already had numbers on to see how long it took them to have a regular-season game with more than 37 pass attempts (sacks excluded). The number of starts is more telling than the number of games due to some guys who played on special teams early (Joe Montana and Tony Romo).

The average was 7.4 starts. I’ve been comparing Wilson to Tarkenton since his rookie year, so this is fitting. Tarkenton did play in a much different era though, as did Fouts, Unitas and Staubach. The best modern comparison is Ben Roethlisberger, but even he had to put it up 41 times on a day his defense let him down against the 2005 Bengals. Wilson’s time will come, but for now, Seattle has a proven winning formula not in any need of changes.

I see a lot of possibilities for the 49ers/Cowboys game, but they all tend to end with a lot of points on the board. Yes, this could be a San Francisco blowout given that Dallas defense, or it could be a game where the Cowboys are up big at halftime and another collapse takes place. Either way that’s the game I’m looking forward to because it could be such a tone-setter for the rest of the season for both teams.

I don’t think the Colts have much of a chance to win in Denver without Robert Mathis, but this could be a much different game in January should they meet again with different lineups. Don’t see Manning going 0-2 against his former team. In 19 home games with Denver, he’s 16-3 with 68.6% completions, 56 TD, 11 INT, 8.07 YPA and 111.6 PR.

This season I’ll have my usual Clutch Encounters column on Tuesday at Football Outsiders, fantasy start/sit on ESPN Insider on Wednesdays and a random topic on certain Fridays at one of those sites. I’ll also probably write here from time to time beyond just predictions every Saturday.

One thing I left out of my 8,000-word season predictions were the awards, so here’s a ballot.