First, a moment of silence for Josh Scobee’s career. Okay, that was long enough.

I hate to play doctor for an injury I don’t even know the extent of, but it might be in the Colts’ best interest to sit Andrew Luck this week with a right shoulder injury. They have to think about the hits he takes and the fact that there’s a big game in Houston on Thursday where the Colts can quickly get to 3-2 and back in first place. Luck being listed as questionable, limited in practice and the signing of Josh Johnson are all signs this is not some minor issue. You could see him wincing on the sideline on Sunday after a little celebratory contact from a teammate.

Let Matt Hasselbeck earn that game check. The Colts have only had 12 games with a 20-point lead in the Luck era. Five of those games have been against the Jaguars, so this team is used to dominating Jacksonville, and the game is at home this week. I’m not sure if a few more days of rest is going to make Luck’s shoulder any better, but I know going out there and taking a beating on Sunday won’t help him for Thursday. The Colts have to think ahead on this one.

But the expectations going into Sunday are that Luck will start. Just what does questionable really mean to Indianapolis?

So things really are up in the air on whether or not he’ll play, though the team probably has a good idea tonight what will happen. If Luck sits out, he’ll end his consecutive start streak to begin a career at 51 games. Here’s the list of leaders since 1950 (regular season only): 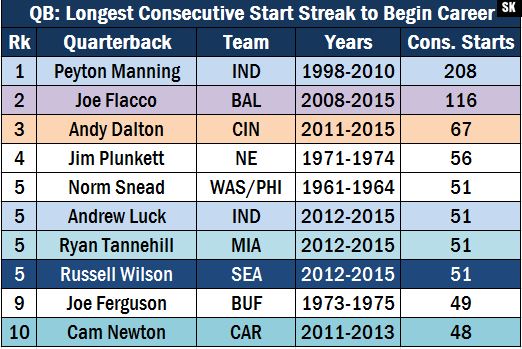 The ironman thing is cool, but sometimes you just have to recognize when you have a winnable game with your backup and your starter isn’t right. It’s not like Luck has been playing well this season.

I like to get up around 12:20 p.m. on Sundays after staying up late. A 9:30 a.m. start for a London game does not jive with me. I got up for last year’s Atlanta-Detroit game, and I could have easily slept in during the first half. The Lions sure did.

But when you schedule Dolphins vs. Jets, that gives me even less of a reason to get up early, though I may be up anyway because I don’t have what you’d call a “sleep schedule.” If I had to rank the worst division rivalries since 2002 realignment, Dolphins vs. Jets is right up there because of how boring those teams have been in that time. We’re not getting a Dan Marino vs. Ken O’Brien shootout here. We’re not even getting older Dan Marino vs. NY-era Boomer Esiason and the fake spike game. We’re getting Ryan Fitzpatrick and a coach from Miami who is going to be fired any week now.

If I end up going to sleep tonight, I’ll probably wake up around 11:30 just to catch the ending of this one. If it’s close, I’m not sure how that will shake out since Fitzpatrick will want to throw interceptions and Joe Philbin will try finding some way to blow the game.

I’m surprised the NFL hasn’t tacked on a midnight EST start out west to go for the 18-hour football Sunday.

And I must say it’s total bullshit to make any team give up a home game for a division game (Miami in this case). That’s the definition of unfair since the other team will be at home when the rematch comes.

Where Are the Good Games?

To the NFL’s credit, we didn’t end up with many better options to ship to London in Week 4. Vikings at Broncos is the only game between teams with winning records. I’m looking forward to that one in the national slot for 4:30 p.m. Both defenses should play very well, meaning it will look like Denver’s other 2015 games. The running game can’t stay this bad all season under Gary Kubiak, right? Denver has rushed for 171 yards at 2.59 YPC. Adrian Peterson has 260 rushing yards in the last two weeks alone.

Denver (and the 2015 Lions) is the 34th team to rush for less than 175 yards through three games since 1970. On average these teams finish with 1,442 yards and 3.69 YPC. Only 9 of the teams cracked 4.0 YPC by season’s end. To the Broncos’ credit, they join the 2007 Packers as the only other 3-0 team on the list. That GB team with Brett Favre reached the NFC Championship Game after finishing 13-3. Ryan Grant really came along for the offense, though there was no running game to speak of in the playoff defeat. Your weaknesses tend to get exposed in the end, but as long as the Broncos have the No. 1 defense and Peyton Manning, every game is winnable. It’s just not going to be pretty.

I followed my worst week in years with one of my best (14-2). Life lesson: the Jets will always screw you over in the end. I originally was going to pick Houston too, but changed to Tampa Bay at the last second. The kicker didn’t help in that one either. The kickers did however help me correctly pick Baltimore over Pittsburgh on Thursday night.