The 2013 NFL season is halfway over and we know just a little more than we did in August.

We know four fairly consistent teams are sitting at 2-6 and possibly (likely?) headed for their first losing season in some time: Texans (2010), Falcons (2007), Giants (2004) and Steelers (2003). The Ravens (3-5) may soon join them for the first non-playoff season in the John Harbaugh/Joe Flacco era. Too bad that “championship gene” dissolves easily in the offseason without enough talent and luck to keep it together.

It’s unclear how the coaches feel, but Mike Tomlin’s thoughts are easy to predict.

“Obviously, a variety of things create the end result, but it’s a result we’re going to take. We’ll tighten the screws, put a hat on a hat and continue to scoop the proof out of the pudding. We accept every serving we get this season. Sometimes it’s tough to chew, but everyone with a willing, hungry mouth will continue to get his plate filled this season. We have eight games remaining on our schedule and you can guarantee we look forward to completing each and every one of them.”

Speaking of standards being standards, we have a new high and low when it comes to 0-8 teams. The Buccaneers are the best 0-8 team ever while the Jaguars are the least competitive team since the 1970 merger. The Jaguars have trailed thru the end of every game after the 11:34 mark of the second quarter. It wouldn’t shock me if both win this weekend, but as far as 0-8 goes, these teams couldn’t be much different in how they’ve played.

Oakland will not be the worst 2013 team as I predicted, but Sunday’s loss to Philadelphia sure looked like the team I expected to see often. Thanks for letting Nick Foles devalue the single-game touchdown pass record.

The Colts and Seahawks lead the league with three fourth-quarter comeback wins. Okay, not everything’s changed from last year. We’ll watch Andrew Luck and Russell Wilson battle for the most game-winning drives thru a player’s first two seasons: 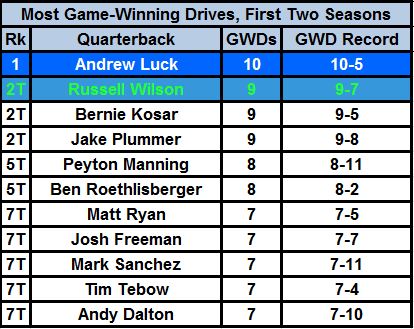 We’ll also watch Peyton Manning try to break the records for passing touchdowns and yards in a season. The schedule will likely be too difficult to set any efficiency records, but the volume could go down. He also has the Broncos on pace for 686 points, which would smash the previous record (589):

Here are some mini-previews for what I’ll be focusing on Sunday afternoon.

Bills at Steelers – I can go on a really long rant about this one, but I’ll try to keep it short. This reeks of a game where the Steelers will do well at home against a rookie quarterback, bringing out the “Dick LeBeau is a master of defense!” narrative because he has a great record against rookies since 2004. He didn’t have to play against Ben Roethlisberger (2004). He didn’t face Matt Ryan (2008). He didn’t see Andrew Luck or Russell Wilson last year. When he played Robert Griffin III, the Redskins had damn-near 12 dropped passes in the game. They stopped themselves. I think the Buffalo running game is a major asset in this one, but EJ Manuel will have to play well in his first game back from injury, which I don’t particularly see happening.

Yet why should anything on Sunday erase the 55-point, 610-yard ass-kicking this defense suffered last week? How does he get a pass for this season for that matter? How can he live down TEBOW? That’s the root problem with the Steelers. No team rests on their laurels as much as they do. As deficiencies have crept up, there’s been no solutions from the GM or Tomlin on how to fix them. Apparently they will fix themselves because “we’re the Steelers, we’ve won six Super Bowls and we’re just going to do what we do.”

Well, the NFL is moving on without you, Pittsburgh. Hopefully you’ll soon turn out the lights in the trophy room and read up on how to build a winner in today’s NFL.

Panthers at 49ers – Both teams have a mobile QB drafted in 2011. Both teams have a stingy defense. Both teams have been on an ass-kicking run against ass-sucking competition. Is it as simple as going with the home team, who just so happens to be the more reliable option? I’m not quick to accept teams without a proven track record. This would be Carolina’s biggest win since at least 2009. We know this team is historically awful in close games and has very few quality wins over the years, so this would be a big step forward. The 49ers, we can trust them more due to the talent they have and their results the last two years under Jim Harbaugh, who had a bye week to prepare for this one.

If Carolina wins I can start to admit I was wrong about them, but they have to show it first. A team I was skeptical on years ago was the 2005 Bengals when Carson Palmer broke out and the defense was getting a ton of interceptions. Without a track record I refused to believe they were legit. I even foolishly made a statement that Palmer would never win a playoff game in his career. Well, he hasn’t, and the Bengals still haven’t won one either. However, I cannot take much credit as that torn ACL suffered in the playoff game certainly had an impact on his/their future.

That’s the NFL sometimes. You can make a prediction, be right about it, but if the reason is something you never had in mind, should you really take credit?

So I’m all about seeing what the Panthers do not only in this game, but against the Patriots in Week 11. Please, make me believe this year is different.

Broncos at Chargers – “Can” the Chargers beat the Broncos? The answer’s always yes to the “can” question, but what would be the reasons? One of them will not be “Mike McCoy knows the Denver offense because he used to be their coordinator!” as that’s a sorry excuse you often hear but rarely ever see matter in a game. Not everyone is as foolish as the 2002 Raiders in how they called the game against Jon Gruden.

Besides, it’s not McCoy’s offense, it’s Peyton Manning’s offense, which defenses haven’t really stopped since he was a rookie. However, when Manning plays San Diego, some weird shit tends to happen. Ask Kenton Keith or San Diego punter Mike Scifres. Last year, Eric Decker tripped and fell on what would have been an 85-yard touchdown.  Three plays later Matt Willis ran the wrong route and it cost Denver a pick-six. In the rematch in Denver, Manning had a bubble screen tipped and returned for a touchdown.

If San Diego can put together long drives against a suspect defense (like they did against the Colts), but finish them for touchdowns, while getting some mistakes from the mistake-heavy Broncos, then of course they can win this one. It probably helps that John Fox is out and Jack Del Rio is the interim coach. Though that could actually benefit the Denver offense if Jack Del Riverboat returns and allows Manning to try some fourth-down attempts not done on Fox’s watch. This could be another very interesting shootout or a big Denver comeback.

Those picks of Jamaal Charles for MVP are a cute way of trying to be different and get some page hits, but let’s be honest. No way is the MVP a player on a sub-par unit for a team being carried by its defense against one of the easiest schedules since 1989.

There’s plenty of time left for most of these competitions to heat up, though I have to think Andy Reid has the coach award on lockdown, unless he suffers a second-half slide that could make Josh McDaniels blush.

I don’t feel confident about picking the Eagles and Bengals, but that’s too many home teams if I didn’t.

I’m not picking the Buccaneers to win because Miami has no leadership and is distracted by douchebaggery, but I just think the two teams are pretty even and Tampa Bay’s been so close to getting a win. It’s time.

But don’t ever be shocked anymore.