Between now and the 2013 NFL season I will be spending some considerable time on quantifying wide receivers. Much of this will be part of an effort for a book written by Nate Dunlevy (with the help of others) this year.

Today I completed a slideshow – a nearly 8,000-word slideshow – at Bleacher Report on the top 25 debut seasons by a wide receiver on a new team in NFL history. Ultimately 47 different seasons were discussed, but I was never able to post a table for them. 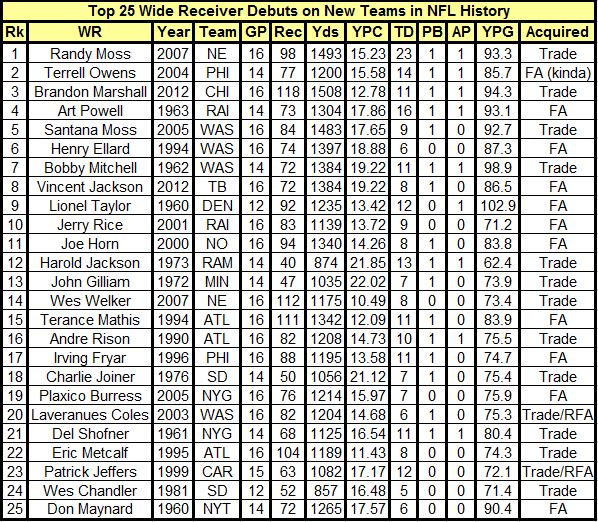 Then there were 22 honorable mentions:

Going through all of NFL history, it would be hard to find many seasons better than these ones. Something like Keyshawn Johnson’s debut in Tampa Bay could be added, and then find two more to get a top 50. But this is fairly definitive.

The most interesting fact after all of this is that with these 47 seasons, not a single one produced a championship that year.

Only five of these players eventually won a championship with that team, and two of them were hardly big contributors. It just goes to show how adding a WR is not a piece that will put you over the top. Especially not right away.

Keep that in mind, fans of the Broncos, Patriots and Seahawks. Adding Wes Welker, Danny Amendola and Percy Harvin could be big, but a Super Bowl win in 2013 by any of them would be a first for this type of move.