Going off an article from last week on the NFL’s Final Four history, I was thinking about how the NHL’s Chicago Blackhawks are this year’s regular season champion and they currently hold a 2-0 lead against the Los Angeles Kings, who are the defending Stanley Cup champions.

How many of these meetings between defending champion and regular season champion have taken place in the NFL?

My data on NFL regular season champions goes back to 1975 when the seeding system was put in place. Here are those meetings (winner in green): 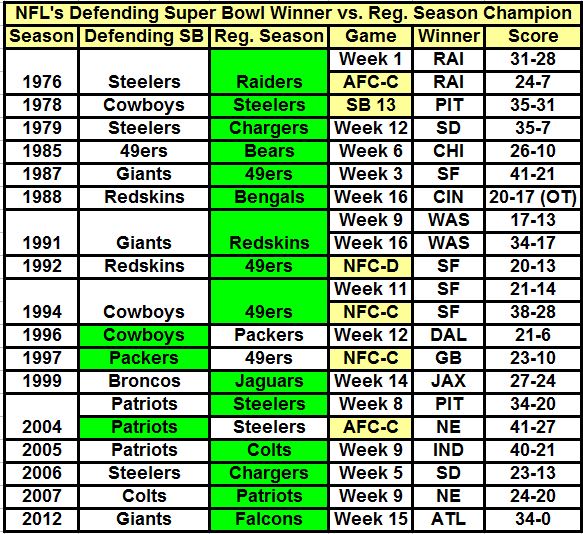 Nothing says “last year was last year” like this table.

The only three losses involve the ‘90s NFC cycle when Steve Young’s 49ers couldn’t beat Brett Favre’s Packers, who couldn’t beat Troy Aikman’s Cowboys. Also the Patriots took their poor loss on Halloween into Pittsburgh and turned it into a 41-27 win in the 2004 AFC Championship.