There are three games this week between teams with winning records, but Bengals-Bills and Cardinals-Steelers lose some bite when you sub in EJ Manuel and Michael Vick for Tyrod Taylor and Ben Roethlisberger. That leaves SNF between two familiar AFC contenders.

Hey, did you hear Tom Brady is pissed off and wants to throw for 600 yards and six touchdowns, and the Patriots want to drop 60 points? I guess all the sixes are natural when you’re talking about the devils of the NFL, but that’s been a heavy part of the lead-in to this game. The Patriots are looking to unleash hell over Deflategate.

So uh, remind me which of these teams was fined an NFL-record one million dollars and lost a first-round pick?

Remind me which of these teams was embarrassed 45-7 in the AFC Championship Game last January?

The Colts are the team with the right to be pissed and seeking revenge in this one, yet it hasn’t been written that way at all. I think that’s because no one expects them to do anything but get their ass kicked on Sunday night at home. The Colts have started this season poorly, especially on offense, and Andrew Luck has missed the last two games due to a shoulder injury. He is questionable again, but should start. He has struggled in all four games against the Patriots, which have all been blowout losses in the end.

I don’t think anyone ever second-guessed the outcome in January over deflated balls. The Colts would have been blown out if they played with medicine balls or beach balls. Give LeGarrette Blount anything he can handle without smoking, and he was going to shred that defense. It was always about protecting the integrity of the game.

Before the season, I really did think the Colts would close the gap like they did in 2005 against New England, but that hasn’t happened one bit. The additions have not panned out, leading to an even worse offense and the defense is still as unreliable as they come. Keep in mind the Colts haven’t even played a top-12 QB yet this season. The Patriots are playing much better than I expected from them so far. You knew the offense would be good as long as Rob Gronkowski was healthy, but they’ve been even better than expected while still attacking teams in an unconventional way from the inside, and now even more from the backfield with Dion Lewis looking like a deluxe Shane Vereen. The front seven was expected to be good, and the revamped secondary is more than getting by. It’s not at a 2005 Duane Starks level, and you only expect Bill Belichick to get better play from that unit by season’s end. The same can be said for the offensive line, which had some struggles in Dallas and just lost LT Nate Solder for the year, but the Patriots usually get stronger as the season goes on. Do I see an undefeated team? Not really, but few road challenges exist on the schedule thanks to the Dallas injuries last week and the overall stank (not a typo) of the 2015 Colts to this point.

It would certainly be very amusing for the Patriots to lose this game since they’ve been hyped up like a 21-point road favorite (actual line: 10 points), but I don’t see how that happens here. Luck would have to play one of the best games of his career, and the defense would actually have to keep flustering Brady for a full game unlike the half-game efforts last season. 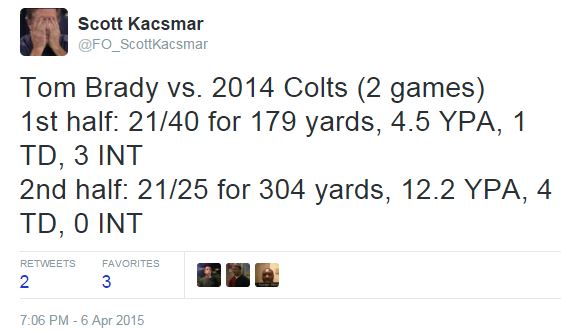 Even if they slow down Brady, what’s going to stop Lewis and Blount from running all over this defense again? Lewis could gain 9 yards every touch in this matchup. Hell, they can probably trot out Kevin Faulk for 8 yards per draw like he used to do against this defense.

The Patriots have had at least a 17-point lead in seven consecutive games against the Colts, going back to 2009. Peyton Manning made two of those games close, even winning the fourth-and-2 game. Dan Orlovsky lit it up in garbage time to a 31-24 final in 2011. But the Pagano/Grigson/Luck-era Colts have lost by 21+ every time. The gap has only widened between these teams since January.

I fumbled away the TNF pick the way Atlanta threw the game away. The quest for a perfect week of picks continues.

I’m trusting the Jags/Jets/Bengals and also Jay Cutler on the road. This probably isn’t going to end well.