A solid schedule this week, so here are some thoughts on the three games I’m most focused on.

Regardless of last week’s interesting matchup in Denver, this was always the more important game since it’s for first place in the NFC. This is probably the toughest two-game stretch for Green Bay in the Aaron Rodgers era. They get back-to-back road games against the top 2 pass defenses. Rodgers’ last six games against top 5 pass defenses have not gone well. As I mentioned last week, Green Bay is 1-9 on the road against playoff teams since 2012. That’s probably 1-10 given the Broncos are now 7-0.

Jonathan Stewart could have a big day against a subpar Green Bay run defense. He’ll have to really, because I don’t see this passing game getting on track this week with Cam Newton and his receivers. Carolina needs to run Newton a lot and be the more physical team. If you punch Green Bay in the mouth early, you’re usually in good shape.

Randall Cobb is starting to show a bit of the “Peerless Price Effect” as he’s not suited to be a star No. 1 WR. Jordy Nelson was, and Cobb is definitely not the same caliber of player. Carolina has to like the matchup with Josh Norman there, so it really is on James Jones to have a big game. I don’t think much of Davante Adams, Ty Montgomery or Richard Rodgers at this point as big producers, and the running game isn’t up to par this season.

So why would I still pick Green Bay?

I think the Packers walked into Denver as a confident favorite against an unfamiliar opponent and had their weaknesses exposed against a great defense and an offense that’s starting to put things together. I don’t think Carolina, coming off an emotional Monday night win, is as lethal on either side of the ball and the Packers will use Sunday night as a wake-up call. Rodgers will be more decisive with the ball and maybe scramble more. Carolina won’t be able to cover the receivers as well as Denver’s secondary did. I saw open receivers galore on Monday night, but Andrew Luck made some really horrible throws and decisions. Remember, this is a Carolina defense that let Luke McCown complete 31-of-38 passes with three drops. It’s a shitty reason to pick a team, but I just can’t fathom Rodgers playing so ineffectively two weeks in a row. He’ll get more out of the offense and the defense has fewer threats to worry about offensively. Regardless of what you’re hearing, Newton is not playing anywhere near MVP level.

Neither team is really good at playing from behind, so I would imagine we’ll get a good taste early of who is going to take control of the NFC with a big win here.

Yes, Ben Roethlisberger is 1-4 against Oakland in his Hall of Fame career, which up until this point has seen the Raiders as probably the league’s worst team in that span. This is the best Oakland team he’ll face yet, though the optimism is largely on the offensive side of the ball. That’s why I think this can be a shootout with plenty of passing numbers. Sure, DeAngelo Williams can effectively replace a lot of what Le’Veon Bell did, but this has to be a bounce-back game for Ben, which means a lot of Antonio Brown, Martavis Bryant and Heath Miller. Remember, Oakland has struggled greatly with tight ends this season. I think a 1 p.m. game at home helps Pittsburgh a bit against a West Coast team coming off a huge win. They smashed San Francisco in that situation in Week 2. Not many road triumphs on the resume for a young Derek Carr, but he’s definitely playing the best of the sophomore QBs. I hate to pick a final score this year with Pittsburgh because the defense keeps beating expectations, but I really do see a high-scoring game here. I just think Roethlisberger makes up for last week’s blunder and takes advantage of a middling defense with his weapons.

I knew the NFL would schedule this game around this point since it’s about the time where Peyton Manning should break a significant record we’ve been expecting him to one day own for a long time. They did an even better job than expected, as Manning can set the all-time records for wins and passing yards in the city that drafted him into this league. Manning has thrown for at least 284 yards in about 45 percent of his games, so it’s not a given, but likely to happen. He would break the record in his 264th game — it took Brett Favre 302 games to compile 71,838 passing yards. 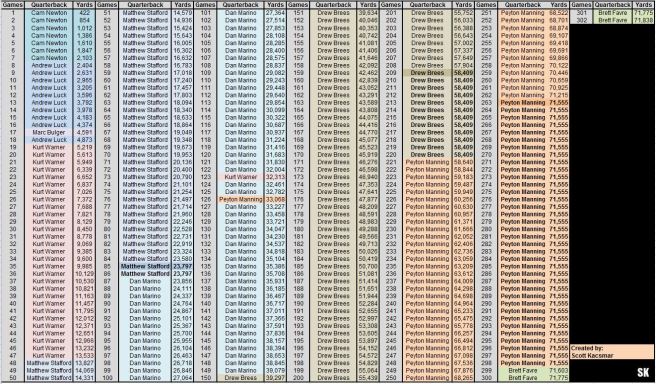 Denver will likely push for the record, though the Broncos have struggled for a good chunk of all three of Manning’s games with the Colts. They were largely ineffective in the second and third quarters in the 2013 game. The second half of last year’s opener was a struggle, and nearly the whole playoff game in January went poorly as I’ve detailed greatly before. But this week is a bit different. It’s not Manning’s first time back in Indy and he doesn’t have a high ankle sprain like in 2013. It’s not in prime time. It’s not a season opener when things are still new and teams are “full strength.” It’s not a playoff game where Manning is playing on a torn quad. It’s also the 2015 Denver defense taking on a 2015 Indianapolis offense that has by and large looked terrible when not trailing by multiple touchdowns this season. Pep Hamilton was a problem for the Colts, but not even a top-five problem. They fired him as a scapegoat to show some change this week, but good luck to new offensive coordinator Rob Chudzinksi trying to game plan for this defense. There’s not much he can really do at this point of the season that would be different, though I guess the Colts have some factor of unpredictability on their side. I just wouldn’t trust any of it (passing to the TEs? more Frank Gore?) to work well against this defense.

I had the Bengals winning by double-digits on TNF. That was an easy choice.