Last week was the best week of this NFL season so far. I don’t have really anything to say about Week 12. Thanksgiving was nothing special, and the 1 p.m. slate looks pretty weak tomorrow (SEA-CAR a highlight).  I think the late afternoon could be interesting in the AFC (PIT-DEN and MIA-IND), and SNF (GB-MIN) looks solid in a game where both teams really need the win. Note I said win. We have three ties already between the Packers and Vikings. We don’t ever need another.

After some rough red zone performances, I went 0-3 ATS on Thanksgiving. Those Matthew Stafford interceptions killed Detroit in what should have likely been a 3-point difference. I think the refs were in on Dallas -7 in not wanting to throw a flag on Dallas after Jordan Reed was blatantly hit in the face. The touchdown there would have covered the spread for Washington. Then the Falcons somehow fumbled three times in the red zone on Thursday night in New Orleans. Just a rough day for the dogs, but great for teasers. 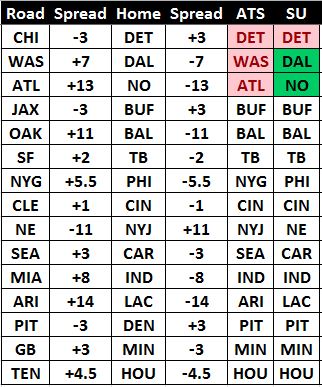 Feels like a ML week for big favorites to me (BAL, NE, IND, LAC). That’s not going to win much, so maybe hedge with Steelers and Bills. I hate to pick Josh Allen to survive the Jacksonville defense, but what about Blake Bortles on the road against the Buffalo defense? Maybe the under is the smartest play in that game. It was 10-3 in the playoffs when these teams met in January. 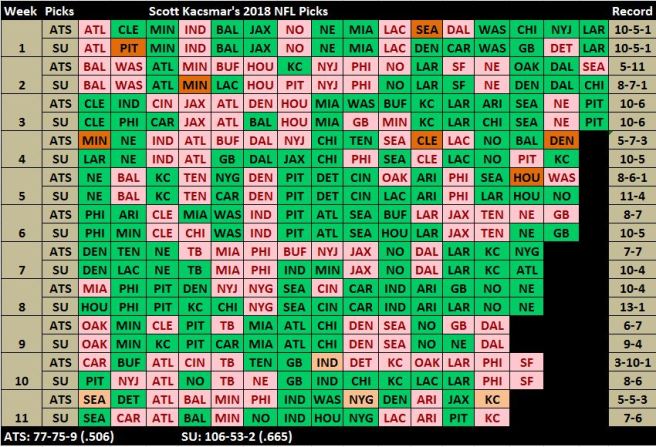