Before moving onto the playoffs, let’s review how teams fared in close games in the 2019 NFL season. Unless you watched the Lions every week, this wasn’t a season filled with close games. A total of 142 games (55.5%) saw at least one team have a fourth-quarter comeback or game-winning drive opportunity, which is a possession by the team tied or down 1-to-8 points. That’s down a hair from 147 games in 2018 and just above the 139 games from an offensively-limited 2017.

The 2019 season featured 56 fourth-quarter comeback (4QC) wins and 77 game-winning drives (GWD). In 2018, there were 69 4QC and 88 GWD in the regular season. So things were down this year and more in line with 2017 than the rest of the decade when there were always 68 to 73 4QC. We also had a Week 1 tie with Arizona and Detroit each having to come back late, and Tennessee’s Ryan Tannehill added another unique win in Indianapolis on a blocked FG return for a touchdown to break a tie. There were also 33 comeback wins from a double-digit deficit at any point in the game, down one from 2018 (34).

Success rate for 4QC attempts was 29.7%, or a little below average. GWD success rate was in the usual ballpark of 35.9%.

The following table shows a summary of each team’s success in close games this season. First, the offense’s record in games with a 4QC opportunity is shown. Next is the overall 4QC/GWD record, which also includes the games where the score was tied in the fourth quarter or overtime. For the defense, holds are games where the defense was successful in defending a one-score lead in the fourth quarter or overtime.

The number of games lost in which the team had a fourth-quarter lead is also shown. The last section shows the team’s overall record in close games, which are defined as games involving a 4QC/GWD opportunity on either side of the ball. Playoff teams are highlighted in gray. The table is in descending order of close game win percentage.

This information can be very useful for previewing the playoffs (which teams haven’t blown a lead and which struggle to hold them) or thinking about regression in 2020 for teams that won or lost a lot of close games.

Most playoff teams had an excellent record in close games, but the Vikings (2-5) had another rough year and the Chiefs and Titans were just 4-4 each. The Titans are 4-2 with Tannehill and 0-2 with Marcus Mariota at QB.

The Ravens, Packers and Seahawks are three playoff teams that did not blow a 4Q/OT lead this year, but Seattle was fortunate to have the Rams and 49ers both miss game-winning field goals against them in prime time. Baltimore actually has a league-best 5-0 record in close games, but that’s because the 33-28 loss at Kansas City and shocking 40-25 loss to Cleveland weren’t opportunities with the ball in Lamar Jackson’s hands late. In fact, the Ravens haven’t trailed in the 4Q in 11 straight games, which is one of the best streaks in NFL history.

The 2010-11 Packers still hold the greatest front-runner streak in NFL history: 19 consecutive wins without trailing in the fourth quarter. This year the Packers have been cutting it close by not scoring as much as those 2010-11 teams did, but they lead the league with eight defensive holds of a one-score lead with no blown leads yet. Maybe Drew Brees will get a chance to bust that in the second round. Green Bay’s 10 close wins are three more than any other 2019 team.

The Packers have twice broken the hearts of Detroit fans this year, but it’s been that kind of half-century for Detroit. The Lions finished 3-12-1 with a staggering 3-11-1 record in close games. That’s right, a year after playing in a league-low six close games, the Lions played in a league-high 15 close games in 2019 and nearly lost them all. Detroit blew six 4Q leads, or two more than any other team. Using three quarterbacks, Matt Patricia’s teams finished 1-10 at 4QC/GWD opportunities. They are 2-15-1 (.139) in such games since 2018 under Patricia so it’s not just a matter of not having Matthew Stafford. Maybe things finally get back on track in 2020, but the Lions have struggled mightily in close games since setting that record with eight 4QC wins in 2016.

Cincinnati was the only team to go winless in close games on the way to 2-14, finishing 0-8 at 4QC opportunities and blowing three 4Q leads. The Chargers (1-8), Giants (1-7) and Colts (2-8) were also atrocious at a high volume of 4QC attempts. Philip Rivers now has the most failed 4QC//GWD attempts in NFL history (78), but Jacoby Brissett (3-14, .176) has the worst success rate at them among active quarterbacks. Colts fans can accept mediocrity at the position in different ways, but blowing so many winnable games is hard to stomach when you know Andrew Luck would have pulled out enough of these games for the playoffs this year. 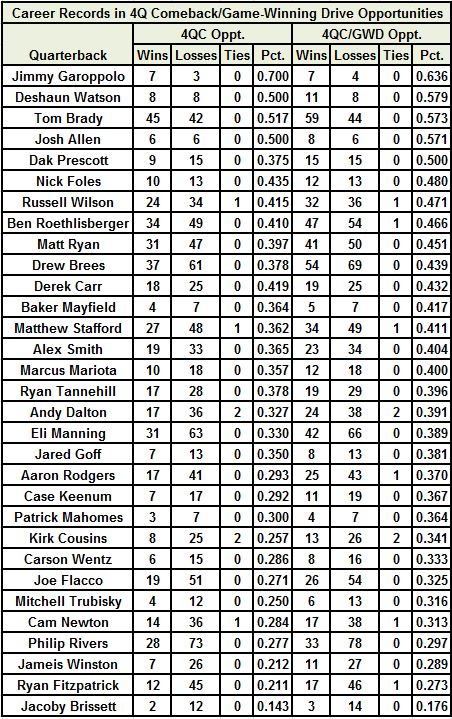 Seattle, Houston and Buffalo led the way with five 4QC/GWD wins this year. Houston also had six in 2018 so that could be a team to watch for regression in 2020. Remember, Dallas had four or five GWD in each of Dak Prescott’s first three seasons, but in 2019 he didn’t lead a single go-ahead drive in 4Q/OT for the disappointing 8-8 Cowboys.

The Broncos and Buccaneers each blew four 4Q leads and finished 7-9. They could be teams to watch on the upswing in 2020, but Jameis Winston will have to cut down on the interceptions first. His pick-six against the Falcons in overtime on Sunday was the only game-winning interception touchdown in 2019.