Last season I did an unusually good job of picking playoff games. I even got really close to the final score on Wild Card weekend. My 9-2 record only consisted of losses by the Colts (too much of a heart choice) and Broncos (“Rahim Moore should die of gonorrhea and rot in hell”). This season, I have virtually zero confidence in having a good month of predictions. This is not a lack of confidence in myself. It’s the inconsistency the 2013 playoff field has shown us.

Factor in the declining quality in officiating — you just know at least one team is going to get royally screwed here — and literally anything could happen. Sure, I would never bet on Chargers-Saints in a February blizzard, but that’s really not even that crazy. I feel like any of the 12 teams could go on a run or could go one-and-done. I’ve never felt this way before about a playoff field. Last year I would have never believed the Colts could win in New England or Denver. I didn’t picture Baltimore doing it, but the Ravens did. Even before we found out it was going to be a lousy game with Joe Webb at quarterback, I gave the Vikings little chance to move past the Wild Card round, let alone win another game.

But each year I see more playoff randomness and there are way too many great players on these teams unable to participate due to injury. So the flaws are all very real. We’re in for a bumpy ride.

I did not have time to start it this week unfortunately, but I will be running an epic series of articles on quarterbacks in the playoffs starting on Football Outsiders next week. If you want a great source of data to bookmark, this will deliver. If you want something to shove in someone’s face when they say something stupid, consider it a belated gift.

Speaking of gifts, make sure to download my updated playoff chart for every team in the Super Bowl era.

Practically everything I needed to say about this game can be found in my preview at Football Outsiders. I do like the Colts in a much closer game than the one in Week 16.

One thing I will add here: I hope Andrew Luck gets his first playoff win today, just so we don’t have to go through this stupid “when’s he going to win one?” thing that is sure to come in today’s media world. “Oh, Russell Wilson won a playoff game last year. Colin Kaepernick went to the Super Bowl. WHAT’S WHRONG WIT ANDROOW LUCK!?!” We went through this recently with Tony Romo, Matt Ryan and Aaron Rodgers, but none of those players were the No. 1 pick in the draft.

Now I’m not saying we need to absolve Luck of all blame if he has a horrible game against the Chiefs, but I don’t think anyone expected the Colts to go 22-10 the last two years with such a revamped and flawed roster. Just being in this position is worthy of respect. Cam Newton didn’t do this in 2011-12. Robert Griffin III already fell off in year two and the Redskins are a mess.

The Colts have beaten the best teams in the league this year without really being one themselves. Imagine that.

Again, it’s been a busy last few days of playoff preparation. You can read my ESPN Insider article (if possible) on Nick Foles’ totally unexpected elite season here. He might look like he failed to land the lead role in Napoleon Dynamite, but the kid can play and it’s not just the Chip Kelly system. I’m impressed and I think he has a good shot to win this game against a Saints team that, let’s face it, hasn’t played well on the road this season.

So what is it about that “Saints are awesome at home, but forget them on the road” thing? I give my thoughts on that here. It is overstated a bit, but until the Saints win a game like this, people will continue to doubt them outside of the dome. Pierre Thomas reportedly will not play, but the Saints still have plenty of backs. They just don’t have nearly the type of reliable running game the Eagles have. The balance is why I like the Eagles to win at home, because it’s not like Foles has to do it all while Brees is likely to go over 45 pass attempts.

You may recall an article I did on offensive balance this summer. The 2013 Eagles rank 18th in balance-adjusted yards per play since 1970:

Should be a lot of points scored, but give me the home team here.

Here’s one where literally anything could happen. The Chargers probably aren’t happy about the 10 A.M. PST kickoff, but they couldn’t even bitch about a crack of dawn start time after the gift from the officials and Ryan Succop last week to even be in this game.

Plain and simple: the Bengals have the best defense in the AFC, they can contain San Diego’s offense, but Andy Dalton cannot blow the game for them. Dalton threw four picks last week and still won. He can’t throw more than two and win this week, because San Diego loves to shorten the game with long drives (death by papercuts). The Chargers had the fewest offensive drives (158) in the league this year and averaged the most possession time per drive and ran the most plays per drive. That’s just how they play football because the offense makes a lot of successful plays and the poor defense allows a lot of first downs.

That all shortens the game, so Dalton cannot waste possessions for his teams and give up field position with turnovers. I think the Bengals are best equipped in the AFC to handle a bad game from their quarterback due to the defense and surrounding offensive talent, but few teams are equipped to overcome a postseason pick parade.

As long as Dalton keeps the picks under three, the Bengals should move on here, but I’ve been wrong before on San Diego.

I guess the weather’s going to be a big story here. What’s the forecast? 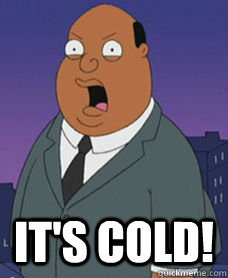 If scoring is down, then I just think that favors the 49ers even more in a tough, grind it out game. The Packers are different now that they have a running game with Eddie Lacy, but the 49ers are such a balanced team on both sides of the ball. They’re frankly just a better team than the Packers, who I think in the future would not be hosting this game as an 8-7-1 team over a 12-4 team they already lost to. But we can’t fix the playoffs this month, so tough shi+.

Dom Capers has had no answers for Colin Kaepernick. By air or ground, it’s been a nightmare the last two games and even Alex Smith picked this defense apart in the 2012 opener. I’m not sure enough has changed for Green Bay to get past the 49ers, which is the exact opposite of this series in the 90s with Brett Favre always getting past Steve Young except for that time Jerry Rice fumbled and no referee cared.

Wait, you mean the NFL referees have always sucked?

The Packers have Aaron Rodgers and Randall Cobb back, which is great and it means there’s always a chance, but this defense is awful and will be without Clay Matthews. The Packers have allowed at least 21 points in 10 straight games (at least 26 in 9/10). They’ve been behind by a lot of unusually big deficits in the second half almost every week since the Rodgers injury. It was a great effort to rally back and make the playoffs, but I just don’t see the defense being strong like it was in 2010 for this team to put together a run.

The 49ers simply continue to be a bad matchup for the Packers.

Oh I’m never a fan of picking the scores because they just provide more ways to show how wrong you were, but here we go.